Bucket List For The Top Outstanding Caves In Vietnam

Possessing abundant limestone mountain ranges as well as a wide range of karsts stretching from the North to the South, Vietnam appeals adventure lovers by its spectacular caverns and grottoes. 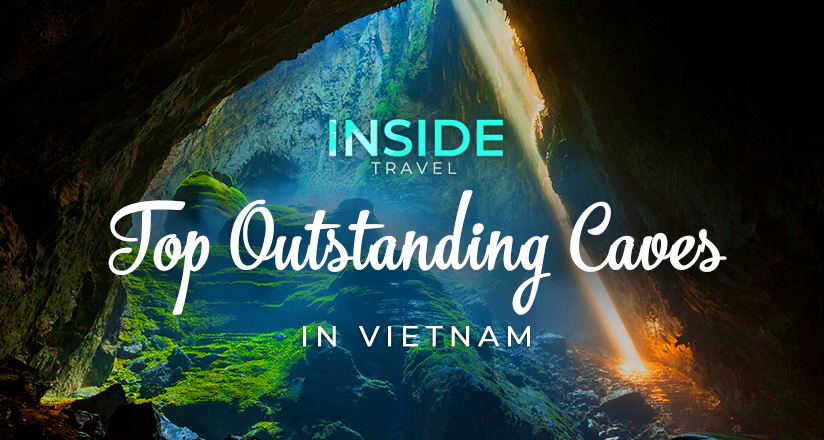 Here is one of the best bucket lists made by Inside Travel expert team for the most outstanding caves should not be missed when you’re travelling to Vietnam.

Son Doong Cave (location in Phong Nha – Ke Bang National Park) is acknowledged as the world’s largest natural cave about its volume British Cave Research Association (BCRA) in 2009. Stretching more than 5 kilometres in length, reaching up to 200 meters in height and 150 meters in width, the biggest cave in the world - Son Doong can contain 40 floors building in New York City or even a Boeing 747 inside without any trouble. Take a deeper look at the incomparable beauty of this cave through both the video of National Geographic team - "Journey Through The Largest Cave In The World" and in 360 degrees which will definitely help you capture a part of its overwhelming size.

There is no word can describe the grandiose volume of Son Doong Cave until you have the first step into this gigantic cave. Every moment of observing the natural pristine architect inside Son Doong Cave will be one of the most priceless moments in your lifetime. You will never stop being surprised during the entire trip. Possessing a massive system of stalactites, stalagmites, phytokarst and even a vast pearl collection with a huge volume, Son Doong is really a breathtaking wonder that Nature ever created. What makes Son Doong even more exceptional is its two huge natural dolines, which allow sunlight can reach inside the cave and help Son Doong ecosystem becomes more diverse plants, animals, species and wildlife.
Up to now, Son Doong is still a huge mystery to all of us which still has so many further things that we have never known. There are many required conditions for passengers who want to book a cave tour to Son Doong. Prepare yourself carefully before deciding to take a trip to explore this wonderful cave!

Being well-known for cave exploring adventures, Quang Binh Province possesses a massive cavern system in Phong Nha – Ke Bang National Park. One of the phenomenal caves here is Paradise Cave (Thien Duong Cave), the longest dry cave in Asia. Paradise Cave makes itself become a big impression to tourists because of its monumental stalactites and stalagmites formation in different sizes and shapes.

Let’s enjoy the beauty inside of the cave by walking step by step up on a 1-kilometre wooden bridge, which is also a longest wooden bridge inside the cave in Asia, you will be overwhelmed by the outstanding size of this cave right from your first set of stairs. There will be lights set along the way, which help all the most spectacular things in the cave become awe-inspiring in your eyes from the start until finish. It’s not too exaggerated that Paradise Cave has another name is “Underground Palace”.

Sung Sot Cave is a must-see destination in your Halong Bay trip. It is considered as a famous stop in almost Halong Bay Cruises packages. Located in the heart of Halong Bay - Bo Hon Island, Sung Sot Cave is the largest and the most beautiful cave in World Heritage Site.
The cave is divided into two main chambers, each one is packed with a lot of beautiful stalactites and stalagmites in diverse shapes, which make you easily contemplate into familiar things such as tiger, elephant, flower, or even dragon or phoenix, etc. The end of the cave is also the highest point, which allows you to broaden your eyeview into the breathtaking scenery of Halong Bay. Sung Sot Cave is a truly amazing masterpiece that Nature gave Halong Bay, which makes it even more out of this world! 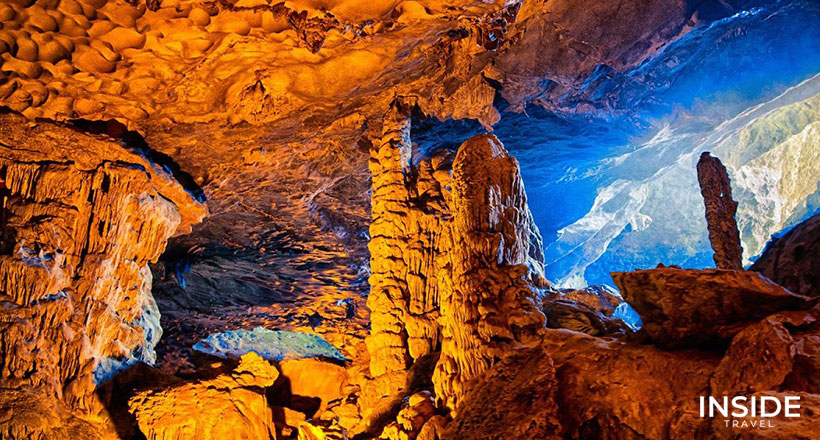 Located around 4 kilometres from Tuan Chau Harbour to the Southwest of Halong Bay, Thien Cung Cave, which is discovered in 1993, is one of the renowned beautiful caves in Halong Bay. Thien Cung Cave obtains impressively gorgeous stalagmites and stalactites system, which bring to passengers the feeling of entering into a heavenly palace with the magic and magnificent surrounding interior. The colourful lights are laid out and shone inside the cave, which makes it much more shimmering and splendid. Once you getting in, just let your mind freely immerse in wonderful imagination with Thien Cung Cave, Nature’s Gift of Halong Bay. 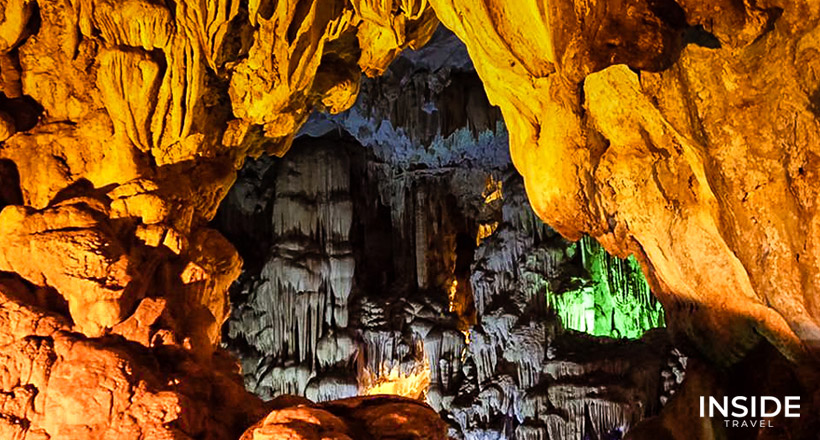 Might not be as mighty as caves in Halong Bay or Quang Binh, Trang An Grottoes attracts tourist by its signature composite of underwater caves system. Once visiting Trang An, you will admire the combination of nature, history and culture here which is very unique in Viet Nam as well as in Asia. Due to its wonderful landscape, Trang An is well-known as “Ha Long Bay on land”. With a wide range of caves linked together by Sao Khe River, the mainstream flowing through mountains in Trang An, the only way that you can explore them is by using the rowed boat.

During your boating time, you will be amazed by the scenery, which is a stunning landscape of karst formation, caves, pagodas, plants, flora and calm clear water. Sustainable preservation has helped Trang An remain the pristine vista, which all passenger fall in love along with the peace and tranquillity here. This is a must for every bucket list for ones travelling in Vietnam. 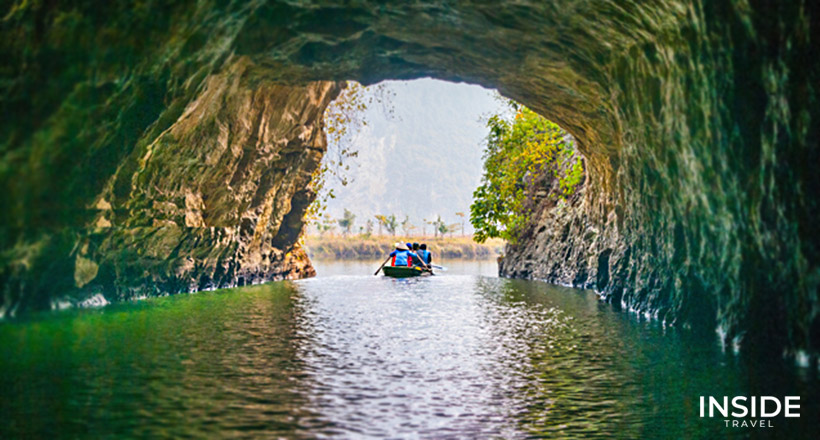 Thach Dong (Stone Cave) is a huge limestone mountain in Ha Tien Town, which is considered one of the most beautiful caves in the South of Vietnam. Thach Dong has two main entrances, one overlooks Ha Tien Town and a part of Cambodia Border while the other commands a view of immense golden rice fields of Mekong Delta and sugar palm tree lines stretching until the horizon. The cave is covered with tropical trees and limestone cliffs in unique shapes. There is a pagoda inside Thach Dong named Tien Son Pagoda, which is built in the 18th century. Thach Dong is an interesting stop for passengers visiting Mekong Delta. 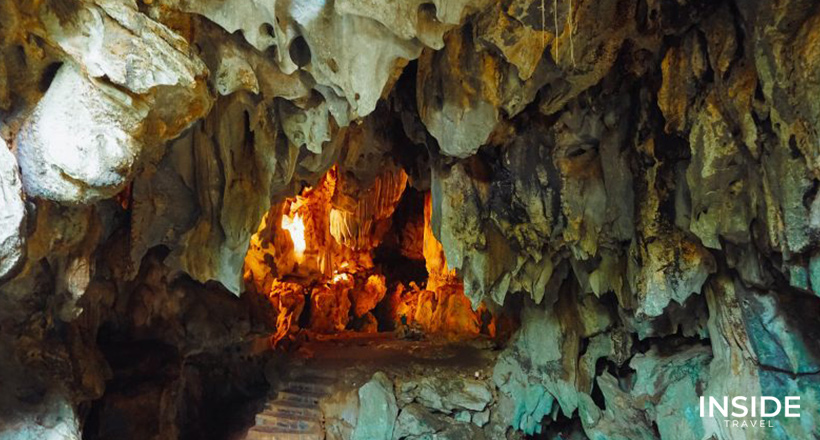 These caves are only six among many other beautiful caves that make Vietnam attractive adventure lovers. With unique features, each of them would be an undoubtedly unforgettable memory to anyone loving the natural masterpieces. A whole hidden world inside is waiting for you to explore!

So without further ado, check out one of our best Vietnam Tours and talk with our travel experts to start a once-in-a-lifetime trip! 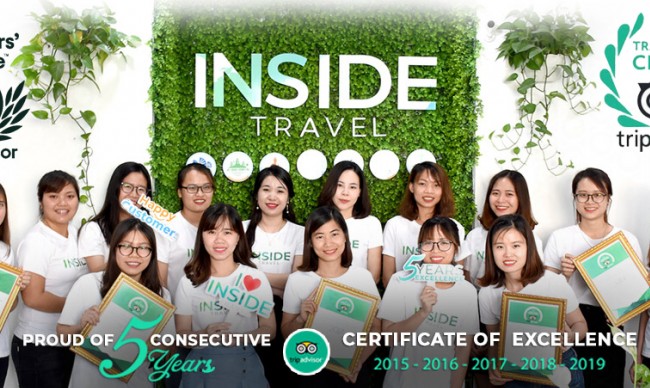 We are very excited to announce that we were recognized by TripAdvisor as a winner in the 2020 TripAdvisor Travelers’ Choice Awards for Travel... 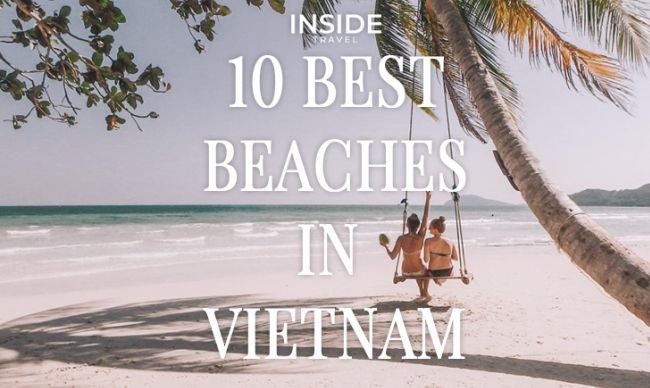 Whenever referring to Vietnam, one thing will immediately spring to everyone's mind: The land of a variety of stunning beaches & secluded coves &... 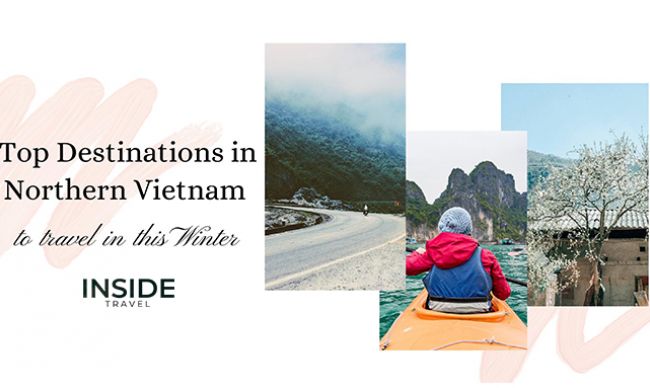 Top destinations to travel within Northern Vietnam in this winter

Stretching from the North to the South of Vietnam, the weather is variable deeply. Whilst it is sunny all year round in the Southern part, for the... 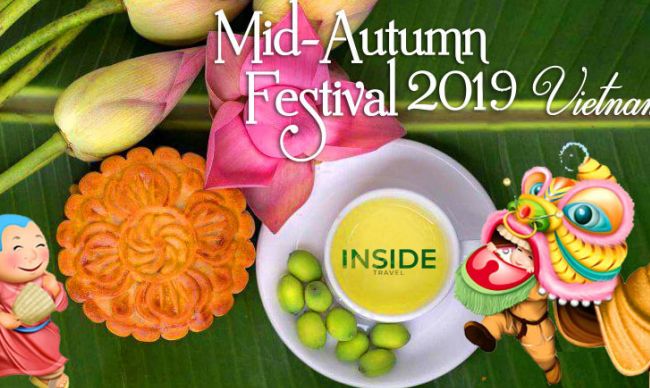 The Moon has a significant meaning for Vietnamese people. From the ancient times, Vietnamese has traditionally followed Lunar or Moon Calendar. Even... 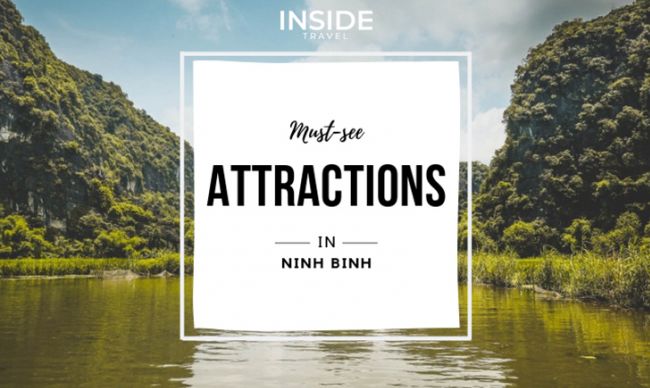 Ninh Binh is stunning and diverse with many things to see and do. One of them is Trang An Landscape Complex - a UNESCO World Heritage Site from 2014,... 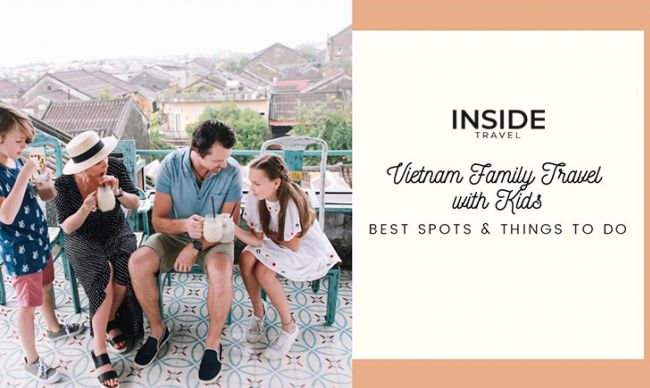 Vietnam Family Holidays with Kids: Best Spots & Things to do

Travelling with kids is the perfect way of supporting exploring & learning while making unforgettable memories with the people you love most. Have... 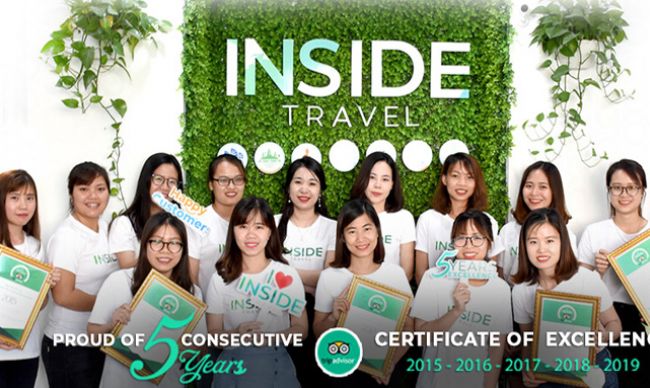 INSIDE TRAVEL WINS TRIPADVISOR'S CERTIFICATE OF EXCELLENCE HALL OF FAME 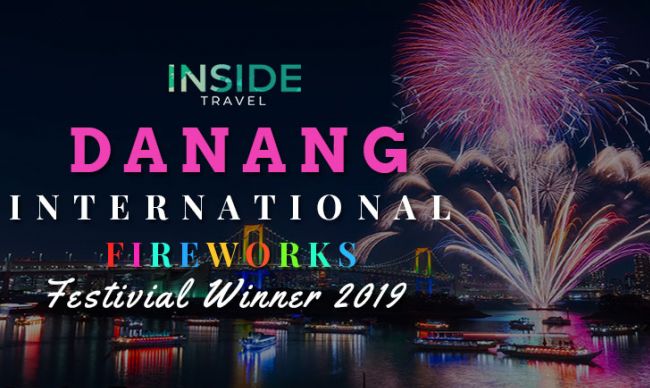 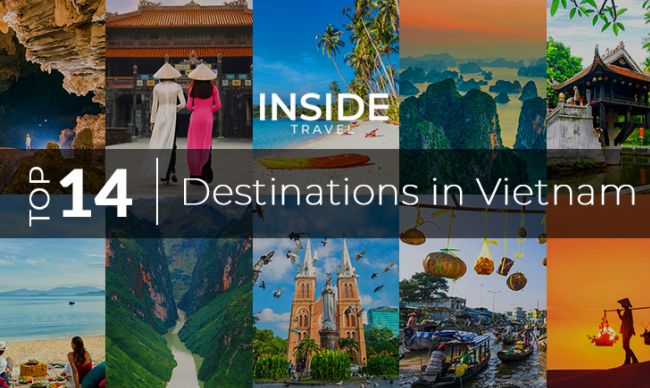 Best Destinations in Vietnam to visit from North to South

Not only famed for its incredible thousand years of history (was ruled for nearly a thousand years by Chinese dynasties till 938 AD, after that was... 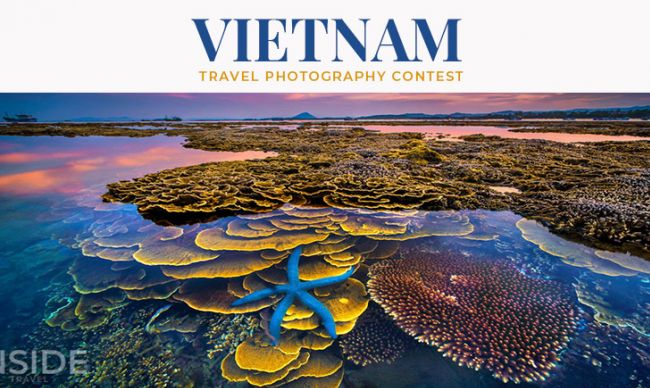 After 6 months took place, the 8th Vietnam Travel Photography Contest with the main theme “I love Vietnam” has chosen the most impressive photos...